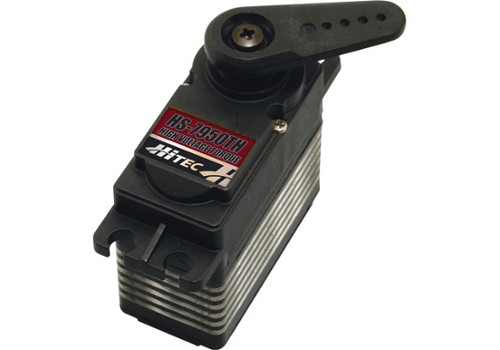 the "Ultra Torque" HS-7950TH is designed to operate on a two cell LiPo Pack. Featuring our high resolution "G2" second generation programmable digital circuit and our indestructible Titanium gears, The HS-7950TH has the performance and durability you've come to expect from a Hitec servo. Other features in the HS-7050TH include a 7.4v optimized coreless motor, integrated heat sink case, and a top case with two hardened steel gear pins supported by axial brass bushing.

The HS-7950TH has been designed for the most demanding hobby applications including the largest aircraft and monster trucks. Featuring a titanic 403oz./in. of torque at 6.0 volts, while still maintaining a respectable 0.15 second transit time

JPH Note: This is one of the most awesome crawler servos on the market today!